How a Simple Law of Physics Can Identify Large Breakout Opportunities

Picture a bungee jumper diving off a bridge. He drops into a free-fall completely trusting the cord attached to him. As  he reaches the  bottom of his descent, the cord starts to stretch, until the elasticity reaches its peak. Then in an instant.  he get's propelled back up ward with high velocity.

Can This Simple Law of Physics Help You Uncover Huge Moves in Stocks?

It's quite possible. In fact, it happens more often than you might think. Like the bungee jumper in the picture above, a stock will make a move to the downside, pause, and then make an explosive move to the upside, often times with 100% gains or better.

This move is identified by a simple "hook" pattern: 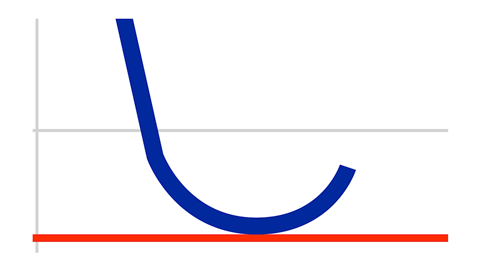 This hook pattern is coincidentally named after a physicist named Robert Hooke centuries ago, and his formula will be addressed a little bit later in this article. But Hooke's Law can help investors find very impressive returns of more than 100%, and it happens quite frequently. 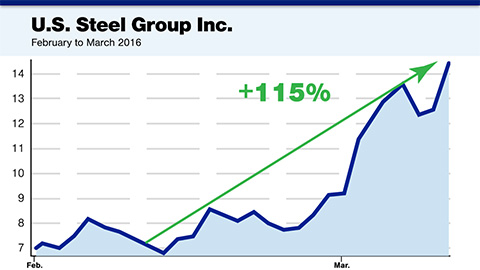 But if you’d been following steel at the beginning of this year, you wouldn’t have expected anything like that from this company.

Demand for steel was down dramatically. China was trying to sell their own unused steel at discount prices. And over the previous months, the industry cut hundreds of jobs.

So to the average investor, U.S. Steel would have looked like a bad bet.

But if you knew how to spot the Hooke Pattern, you’d have seen this in an entirely different light. Because in early February, the blue line began rapidly diving toward the red line.

And right here, on February 11, they met. Immediately after, watch what happens… the Hooke Pattern forms and the stock explodes. It surges 115%.

Around that same time, February 9, we see the same thing happening in a lesser known company, Ion Geophysical. 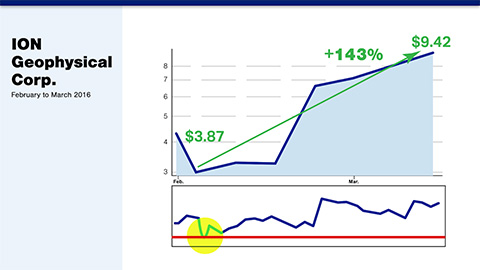 Now, just like with steel, the entire oil industry was taking a beating. And on the surface, Ion looked even worse than most of its competitors. Their VP and Treasurer recently jumped ship, and Bloomberg said Ion was a member of the “Junk Debt Army.” Again, an average investor might not have taken the stock even if you bought it for them.

But the Hooke Pattern was telling a different story. At the bottom of the chart, you can see the blue line bouncing off the red line. Just like the bungee jumper, this stock had stretched to its limit, and then propelled itself upward from #3.87 to $9.42 per share for a profit of 143%

Tesla did the same thing in the face of negative news in 2013: 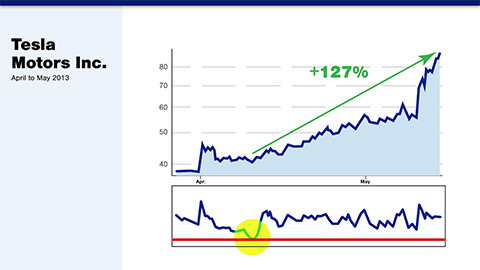 Which must have come as a surprise for the big banks and media outlets that were predicting Tesla’s demise.

- And even the NASDAQ – the exchange where Tesla’s stock is listed – reported that this company is “a cash burning     machine.” The press and the so-called experts had written Tesla off.

And this caused too many Americans to miss out on this stock.

But the story would've been completely different if they knew how to spot the Hooke Pattern.

You can see the blue line on your screen quickly moving toward the red line. Then on April 9, it reaches the bottom and forms that distinctive Hooke Pattern.

Learn How the Hooke Pattern Allowed  a Chemical Engineer to Quit His Job,
Launch a Hedge Fund, and Make More Money Than He Ever Dreamed Possible.

D.R. Barton is not a Wall Street Insider. He was a Chemical Engineer working at DuPont. Like many, he had a 401(k) account and started to dabble in investing. The problem was... he wasn't any good at it.

His trading was erratic and none of his outcomes were repeatable. An engineer without a system. He read multiple books on fundamental and technical analysis. He studied charts and developed spreadsheets. All  of his study of the markets still yielded inconsistent results.

He came to understand that he wasn't an economist, he was an engineer who understood physics.

Physics is far more accurate than economics. Nobody questions Sir Isaac Newton's Law of Gravity or Einsteins's Theory of Relativity.

This brought Barton to another law of physics that nobody questions: "Hooke's Law" 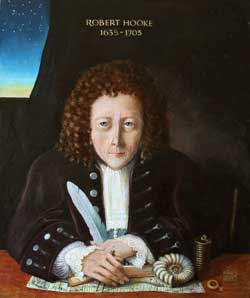 It was discovered by Robert Hooke in the late 1600s… and coincidentally, when it’s plotted on a chart, it looks like a hook.

This is the formula. Hooke’s Law:

In simple terms, it takes the force being applied to an object, divides that by the “elastic resistance” and it tells you exactly how far that object will move.

Let's go back to our bungee jumper.

- When he jumps off that bridge, gravity begins pulling him down. That’s F.

- There’s another force in play here. That’s k, or the elastic resistance of the bungee cord.

- If you divide F by k, it gives you X. This is what I call the Zero Line.

This is the point where all the downward movement grinds to a halt, the momentum shifts, and the person springs rapidly back upward. 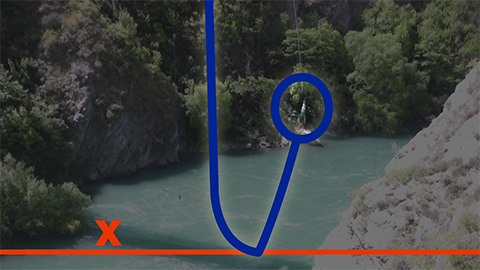 And there it is. That Hooke Pattern should look familiar by now.

Now, obviously no stock can actually be impacted by the laws of physics that we learned in high school science class.

So Hooke’s Law itself will not tell you what a stock is going to do.  In order to adopt this formula to the stock market, Barton  had to add some other minor calculations to round out his strategy.

And it worked like a charm. Better than he ever thought possible.

For the past 26 years, the Hooke Pattern has appeared
just before huge leaps in ordinary stocks.

Let look at exactly how this works with a stock from his early days analyzing this pattern. This is a one-year chart of Amgen from 1998 to ’99. 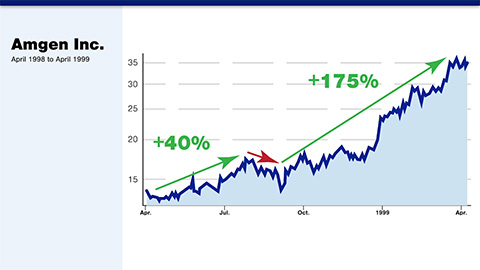 From the beginning of April to the end of July, you can see the stock rise about 40%.

Then it pulls back significantly in August. But at the end of the month, seemingly without warning, the stock begins a 175% surge.

Now most people would have never seen this coming.  But you could have by remembering one simple rule:

Always wait for the Hooke.

Look at the box below Amgen’s chart. 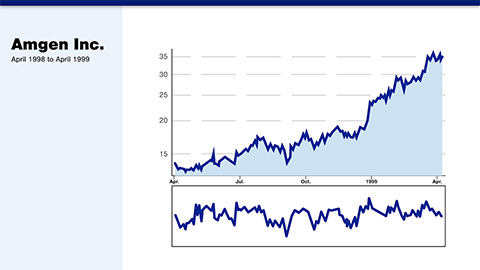 The blue line at the bottom is a day-by-day measure of how far away the stock is from its 20-day moving average.

In other words, that’s the stock’s elastic resistance (k) on any given day.

Now, look right here at the end of August… 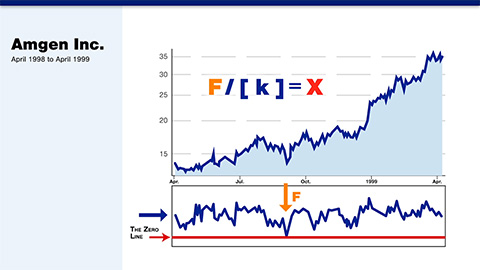 You can see the stock pull back very quickly.

- The speed of that movement gives us the stock’s Force (F).

- Now, if you divide that Force (F) by the resistance (k), you can determine the Zero Line.

Again, that's the red line right at the bottom.

Once the stock hits the Zero Line, it can’t go any further. And as you can see here, once the Hooke Pattern appears, the stock’s price does exactly what we expect. 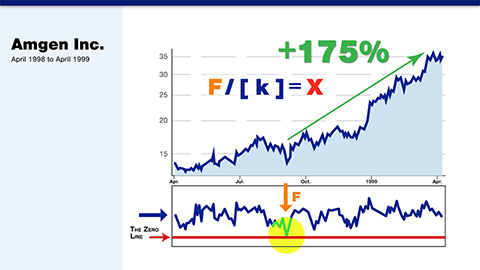 And this happens over and over again…

Here are a several more examples where you could have
used the Hooke Pattern to identify extraordinary opportunities: 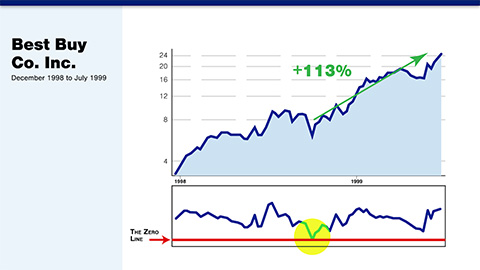 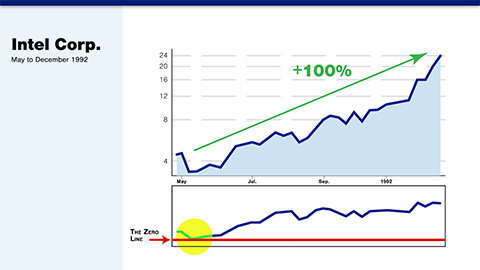 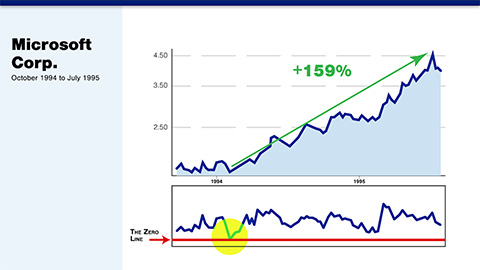 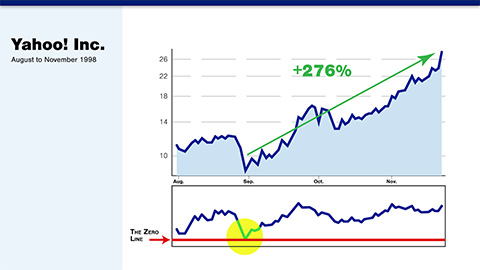 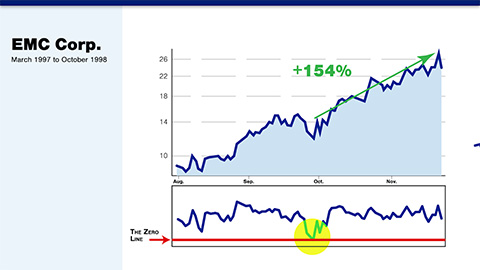 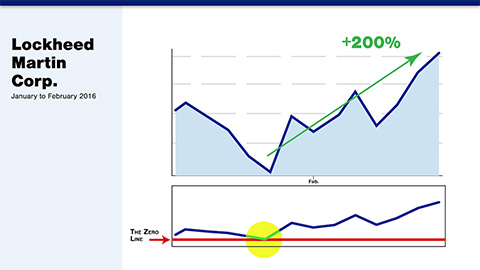 How can you determine which stocks to target?

D.R. Barton built a custom screener that searches for any stock that’s exhibiting the Hooke Pattern.

It might be a big company on the Dow Jones or S&P 500… or it could be a small cap or midsized company.

Anywhere the Hooke Pattern develops, the system will find it.

But on its own, the Hooke Pattern won’t tell you how far or how fast you can expect the stock to move.

Using the data gathered by the system, Barton personally vets each stock and identifies the most promising opportunities.

And he screens only opportunities that have the potential to at least double in under a month.

So here’s how he determines whether or not a company has the potential to meet this lofty goal.

He built five unique milestones into his screener.

If the stock meets at least four – then it’s locked and loaded.

Here are the Five Milestones:

1. Massive Momentum. First the system looks at the stock’s long-term momentum. Meaning, if the stock is in an established         upward trend before we see the Hooke Pattern that will accelerate our profits.

2. Buying Trends. Second, it looks at the buying trends. If the stock is overbought, then it’s going to have a hard time making         a quick move upward. But if it’s oversold when the Hooke Pattern appears, then we can expect a fast move upward.

3. Sector Strength. Third, it looks at the market sector. If the Hooke Pattern appears with a stock in a sector that’s trending up,     it’s a sign the price can move faster than normal.

4. Price Range. Fourth, the system checks the stock’s average price range. If it’s already made big jumps in short periods of         time, that’s a good indication that it can happen again.

5. Volume Action. And finally, the system looks at volume. Basically how many people are trading the stock. If the volume is         lower than normal, it means there’s a lot of room for people to pile in behind us as that stock begins to climb – and that can       really accelerate our profits.

So to recap – my screener identifies stocks that exhibit the Hooke Pattern – it then qualifies them using these five milestones – this lets me quickly review everything – and if it all checks out, I pass on my recommendation.

Click Here to get instant access to the complete Hooke Pattern Report, and learn how you can start getting alerts to Hooke Pattern opportunities tomorrow!